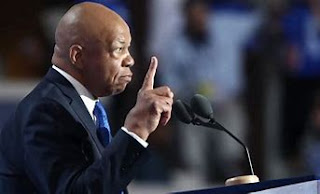 Elijah Cummings was a member of the U.S. House of Representatives for
Maryland's 7th congressional district for over two decades. Yet, his district is one of the biggest poverty-stricken and crime-infested areas in the entire nation. This is a black man who sold out the black youth of Baltimore a long time ago. While decrying the murder of young black males by police officers across the nation, he skipped his black ass to the scene of the crime where a young black man named Freddie Gray was murdered by cops in Baltimore in 2015 to tell Freddie Gray's family and the black community to fall back and let the system run its course. Gray, who was 25 years old at the time of his murder, was arrested by Baltimore police for possessing an illegal knife. While being transported in a police van, Gray fell into a coma and was taken to the hospital where he later died from injuries to his spinal cord. All the cops involved in his death ended up going scott free. Neither one of them served a day in prison.

Today, cops are still killing unarmed black men and black women, even during the time when Elijah Cummings went before Congress and argued on behalf of migrants and the children of migrants born in the United States. While black citizens of Baltimore were suffering in poverty, being executed by cops, incarcerated and kidnapped off the streets, Elijah Cummings went before Congress and told the nation that the children of migrants are currently locked up in cages by a president who is racist and how morally wrong the immigration policies were that did not protect migrants. But what about the black children currently locked up in cages across this nation? Black children aren't protected in Baltimore from police, pedophile rings, organ traffickers, and the system of white supremacy! Under Cummings' regime, white supremacy flourished and he was part of perpetuating this horrid system for a very long time. Not only did he perpetuate poverty in his own district for many years, he never had any intention on raising the economic power of black people within his district. It's easier to control black people when you have the economic advantage over them and you create desperate situations for them. Even now, I'm experiencing this on my job. A manager believes she has the advantage because she thinks I need this job for my survival. It's true I don't have a lot. Otherwise, I wouldn't be working for their low-paying and slave-driving asses! So she figure she can disrespect me and everything's going to be all good. Not only did she recently speak to me in a tone, which I felt was uncalled for but she insulted me with her religious beliefs. She told me how God is not going to bless me when I'm complaining, not thankful for what I already have, and not content in whatever state I find myself. I told her God hasn't done anything for me. "Everything I have, I've gotten on my own," I said to her. At the time she said this to me, she didn't know that I do not believe in the myth called God. She went on to tell me God blessed me with my car and how I wouldn't have that car if it were not for God. My response to her was, "You're right. I wouldn't have it if someone had not helped me pay it off because I almost lost it." (God sure as hell wasn't going to help me pay it off). While I'm being forced to listen to Christian music at work, certain songs come on the airwaves about how God is a provider. How he put clothes on your back and shoes on your feet. That's a damn lie. Christians need to stop lying and misrepresenting the biblical God! If it weren't for me working, I wouldn't have clothes on my back and shoes on my feet. Neither would I have food on my table and a place to lay my head. Because God don't exist.

This slave narrative she gave me from the Bible about being content, I've heard all too often from the pulpit at my former church. The same mindset this individual has was the same mindset Elijah Cummings had as he told black people it's their fault things aren't good for them in their lives, and in their communities. Meanwhile, we live in a racist nation in which a certain group of people had a head start of 400 plus years. They have the economic advantage due to enslaving another group of people for well over 400 years! Telling black people it's their fault they don't have anything while excusing 400 plus years of racist U.S. policies that enslaved entire generations of people is almost like America telling the Jews it's their fault the Nazis put them in slums, stole their wealth, destroyed their businesses, sent them to concentration camps, and exterminated them. While telling black people it's their fault they don't have anything, racist people at the head of corporations/businesses generally underpay women and black workers, especially those at the bottom levels while these people generally are the ones doing all the heavy lifting and performing the toughest tasks. Businesses like my employer underpay those at the bottom levels while demanding all this work to be done. Then, you got niggas (i.e., slave overseers) who think they can talk to you any kind of way. I don't give a rat's ass how much I need this job, you will not disrespect me and think that everything will be great afterwards. I will make you pay for how you treat me. Unlike Botham Jean and his family, I am not a Christian. I no longer subscribe to the mind control program called Judeo-Christianity. Today, I won't be giving a pass to assholes on the job. Neither will I be giving a pass to Elijah Cummings.

Why are black people continuing to give passes to assholes, racists and their slave overseers? Elijah Cummings was a slave overseer during his lifetime and is the equivalent to a Nazi sympathizer. The Jews didn't give the Nazis a pass. They found every one of those murderers they could find alive and put them to death.

For decades, Elijah Cummings has not only pushed a slave narrative to Black America but he has openly been an obstacle to black empowerment. While Cummings came up, his community went to hell. Like most black congressional leaders, their only interest is lining their own pockets. To hell with Black America and our needs! This is how it's been for the past 60 years. Our very survival in this country depends upon economics. Otherwise, we may as well be back in chattel slavery, which is probably going to happen in the near future since economists have predicted that the median household income per black family will be $0 by 2053.

Elijah Cummimgs has been a pumpet of white supremacy ever since the Civil Rights Era. May he not rest in peace. For all of his achievements, he failed at liberating his own people from the system of racism and white supremacy, which should have been his one and only priority during the Civil Rights Movement and his tenure in Congress. I would say that today, black people are much worse off than they were during the 1950's because black people had not yet integrated with white society.

Due to integration policies, black people own less mom and pop businesses today than they did during the 1950's. Black people collectively have less wealth. I don't care what he did to help migrants. What exactly did he do to help Black America, especially those in his own district? Did he stop police brutality, which resulted in the death of Freddie Gray? Did he end the cycle of poverty and hunger within his district? Did he bring better and more lucrative employment opportunities to Baltimore? What did he do specifically for black children in Baltimore? Other than some educational programs and encouraging black children to work hard (as if this was the antidote to end black oppression and poverty), what exactly did he do to lift his Baltimore community out of the slums and raise it into an affluent community? His decades as a member of the U.S. House of Representatives was spent managing the slums of Baltimore. Elijah Cummings witnessed first hand what happened to black people during the 1950's, 60's, and 70's, but yet he chose to serve white supremacy and betray black people for decades.

Today, Elijah Cummings' memorial service is scheduled to begin at Morgan State University and end Thursday in the National Statuary Hall of the U.S. Capitol. When I first heard he'd died, I didn't show any emotion. My mom's passing from cancer in 2017 will be memoralized in my head forever. Not Elijah Cummings' passing. He did nothing to completely liberate black people from the system of racism and white supremacy in order to deserve my respect. He may as well have died during the Civil Rights Era along with Martin Luther King, Jr., Medger Evers, Malcolm X and countless others. A traitor who perpetrated white supremacy for decades is finally being laid to rest on Thursday. Good riddance.
By Black Politico Media at October 23, 2019