A Comparative Study Between the Genesis Creation and Babylonian Creation Myths

The Enuma Elish is the Babylonian story of creation, which predates the biblical creation account. Prior to the 19th Century, it was originally thought that the Genesis creation story was the oldest in the world. However, sponsored excavations in Iraq in the mid-19th Century to corroborate historical evidence for the stories in the bible unearthed evidence that both the Genesis creation and Genesis flood are based on ancient Mesopotamian myths recorded on stone tablets. Both biblical accounts are indeed concoctions and distorted versions of earlier myths. The names of each character in the Genesis creation and Genesis flood aren't their true names. The biblical God that decided to destroy all life on the planet in the Genesis flood account is loosely based upon Enlil, which was the son of Anu who was known as the sky god while Enlil was lord of earth and his half-brother Enki ruled over the seas. It was Enki (in other versions, he is called Ea) who, according to the Mesopotamian myth, was responsible for engineering Homo Sapiens to relieve the gods of the toil of mining for gold, which the Anunnaki desperately needed to repair the ozone on their home planet called Nibiru. The Anunnaki came from a planet not in our solar system, and they came here specifically in search of gold. They needed laborers to mine for gold so they brought the Igigi to Earth but the Igigi rebelled after thousands of years. This is when it was decided by the Anunnaki to engineer Homo Sapiens to replace the Igigi...to relieve the gods of the work load. Homo Sapiens were then made from the DNA of an extraterrestrial and an earlier hominid known as the Homo Erectus. Homo Sapiens were fashioned from dirt clay. 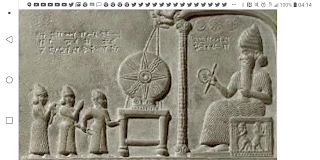 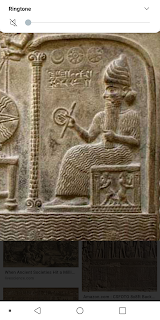 After the Anunnaki had gotten enough gold to repair Nibiru's ozone, Enlil grew tired of the human population. The Genesis account states that God was grieved at man's wickedness, and decided to cause a flood to wipe out all human and animal life. The original Babylonian myth for the reason behind man's destruction by a Great Flood had absolutely nothing to do with man's wickedness. Enki said that man had become too noisy and he could not rest. It was human overpopulation for the reason these extraterrestrials took counsel to destroy their creation. Rather, it was the wickedness of extraterrestrials that caused earlier Homo Sapiens to be destroyed. Enlil convinced the other extraterrestrials to destroy mankind. They all agreed with Enlil, even Enki. According to the Babylonian myth, Enki decided to save certain humans, one of them being the last Sumerian king/priest that existed prior to the Great Deluge. This Sumerian king also saved other members of his family from the flood. He was ordered by Enki to build a boat. He built the boat. Then, he held a great feast, and invited his subjects and family to the feast. Meanwhile, he had his wife and children enter the vessel. He had other members of his family also enter. Animals were already upon the vessel. The king of Sumer shortly entered the vessel, and the rain began to pour. Unlike the Genesis flood myth, it was more than eight people that entered the vessel and came out of it. 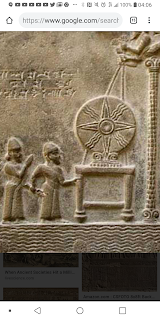 The Sumerian king list, which began with the rulership in Eridug and lasted long after the king who existed when the Great Flood occurred, indicates a very advanced civilization in the land of Sumer lasting for thousands upon thousands of years. Just as the ancient Egyptians whose civilization was also well advanced, the Sumerians left monuments and artifacts displaying their achievements and high standard of living. 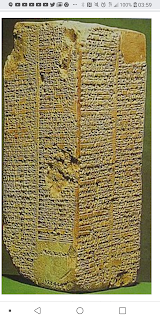 The Babylonian myths including the Enuma Elish tells the story of how the gods and goddesses came into being as well as this solar system. These myths tell the story of early human settlements in the land of the Tigris and Euphrates river valleys, and how humans were created to be servants of the gods (i.e., higher intelligent life forms called the Anunnaki). Except for the biblical creation myth, there is always a male and female principle in every creation myth. There is always the story of goddesses coexisting with the gods in every story, except the biblical myth.

There are several ways in which a myth can be viewed:

1). A traditional story, especially one concerning the early history of a people or explaining a natural or social phenomenon, and typically involving supernatural beings or events.

2). A folklore genre consisting of narratives or stories that play a fundamental role in a society, such as foundational tales or original myths.

3). A person or thing having only an imaginary or unverifiable existence.

Because a story is called a myth does not mean that the story is based on an outright lie or one's imagination. In fact, most myths are based on real events or phenomenon. Even though the explanation that the Mesopotamians gave for how the universe and world were first formed by Apsu (god of freshwater) and Tiamat (goddess of salty/bitter waters) may sound like a bedtime story you regurgitate to a five-year old child, it was their way of expressing otherworldly beings, how creation came out of salty/bitter waters mingled with freshwater, and how homo sapien man was engineered to be a slave species by the children of Anu called the Anunnaki.

The canonical bible and Book of Enoch are full of tales of extraterrestrials that look like us, their commingling with humans, and their destruction of humans, especially in the Genesis Deluge as well as the story of Sodom and Gomorrah. The Genesis Deluge is also loosely based on the Epic of Gilgamesh, which is about a Sumerian king that ruled Uruk who, upon his travels to find the secret to immortality, meets a man who claims that Enki saved him and his family from the Great Flood.

According to the Enuma Elish, there was a power struggle between the early gods and goddesses. Tiamat, who created her son (Lahmu) and daughter (Lahamu) out of the union with Apsu, became angry that Enki having put Apsu to sleep, and afterwards killing him, sought revenge. Lahmu and Lahamu begat Anshar and Kishar who also begat Anu.

Tiamat had enlisted Qingu to kill Enki and wage war with the other gods. Marduk, the god of thunder and son of Enki, ends up killing Taimat and then slicing her corpse in half to create the heavens and the earth.

According to Wikipedia, "The Enûma Elish states that Tiamat gave birth to dragons and serpents among a more general list of monsters including scorpion men and merpeople, but does not identify her form as that of a dragon..."

Based upon the earlier myths, all sorts of creatures naturally evolved by way of the primeval waters represented by Tiamat. But not the human species. We evolved too quickly and not without help. The Anunnaki engineered Homo Sapiens and gave them certain technology. They gave them intelligence. They also destroyed mankind. The Mesopotamian myth says that some Anunnaki stayed behind and they circled the earth from celestial boats (i.e., spacecrafts; rocket ships) as Sumer (maybe the entire planet but evidence suggest it was a regional flooding only) came underwater and humans were destroyed. The Anunnaki even hungered for food while humans were drowning in the flood waters, according to the Epic of Atrahasis. Atrahasis was the last Sumerian king/priest that was saved by the Anunnaki extraterrestrial Enki. Atrahasis is the equivalent to the biblical Noah and in the Epic of Gilgamesh, he was also known as the immortal man Utnapishtim. The Epic of Atrahasis says that the gods hungered for food because there were no farmers to work the soil.

The Anunnaki that stayed behind also returned to Earth and built giant structures like the huge temples seen all over the world called ziggurats in certain countries and pyramids.  Eventually, the Anunnaki left our planet. They left their creation with certain technology, which we should not possess.

Today, there are too many people on the planet and we are producing far too much chemical toxins into the environment. There is too much plastic in the oceans, which has an adverse effect on sea life. With our current technology, we are destroying the environment, the ozone layer, the sky, the oceans, the plants, trees, animals, and ourselves. We have so much but know so little. Most human beings don't even know themselves and their true power. Most people believe cars, cellphones, laptops, and other types of electronic devices are among the greatest of man's achievements. But all of these things serve as our destruction. Fresh water and oil are two major resources that cannot be replenished or replicated. We are running out of both.

Due to man's inability to protect the future and future generations, we are slowly self-destructing as a species. This planet will always be here, even without humans to inhabit it. This planet does not need humans. Human beings need this planet to continue as a species. In our quest for knowledge, we have set the course for our own destruction. The Anunnaki should have let every human being perish in the flood waters because we do not deserve this planet in our current state and mentality.

Planet Earth was truly once a paradise. But the depletion of the ozone layer, the poisoning of our environment, and the oppressive systems that exist throughout the earth due to man's selfishness, hatred, pride, and greed have turned this once beautiful paradise into a literal hell. The Anunnaki should have destroyed us all. They should not have left alive any survivors. Will they come back some day to finish the job? Perhaps.